DAY
This is for my printmaker friend, Mary Westring, who has painted this view, preferring the golden mystical dome dominating the fame of the 'other'.   She lives in Brooklyn. 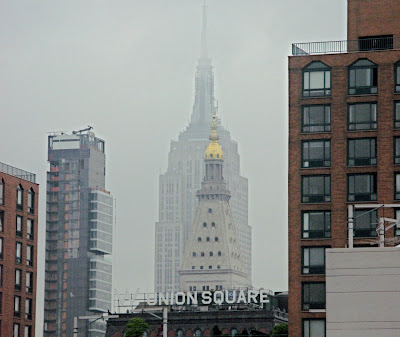 Nestled between the Zeckendorf Towers is the 'other', the shrouded Empire State building.  At night the view is often seen in an incandescent shimmering white,  fairy land of light, when not spotlighted in colour for special occasions.
NIGHT AND DAY 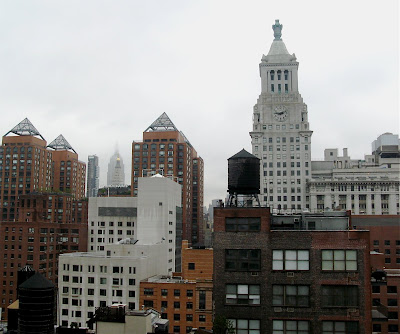 Similar to the NIGHT shot of two days ago, this is a continuing dull, damp DAY.   To the left, looking down beyond, is Union Square park itself, where the green market hangs out, and a lot of performers, too.
As for the novel NIGHT AND DAY by Virginia Woolf,  it was not a success as a seller until many years later.  At the time, Katherine Mansfield criticized it for Woolf's refusal to engage in the war.
What neither of them knew, at the time, was that NIGHT AND DAY could not have been written by a stressed Woolf if she had NOT withdrawn into the stable prewar life, where it seemed as if individuals could still make decisions about shaping their own lives.
(Coincidentally, yesterday, I visited my BC surgeon for usual checkup.  He was not in
favour of  engaging in the the world focus on bad news - in short, stress in any form
becomes a health issue. Get out and about and enjoy the local scene).
Julia Briggs's book continues to grip my interest as she next tackles Woolf's third novel, JACOB'S ROOM (1922).   It is a good read if anyone is interested in VW's desire to change the shape of the novel,  showing the early development of her method.    The time is WW1 and it is about the meaningless of the loss of life of so many young men, including her brother-in-law.     I had an uncle who, at 17,  ran away to fight in this senseless war and died.   I find myself the caretaker of some badges, and a pendent framing his photograph, the only one that I have ever seen of him.
I REGRET THAT IT IS A LONG WAY DOWN TO COMMENT,  after the 3 thumbnails!
Posted by Margaret Gosden at 5:54 AM