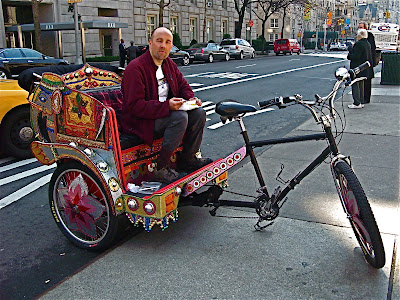 Yves is french and calls his pedal cab a "rickshaw" (as any self-respecting european immigrant might).  It is the most fanciful one I have seen around, this one parked outside the Metropolitan Museum of Art yesterday.
As a reminder to anyone interested, the Pierre Bonnard exhibit ends April 19.
Since the day was so fine, we considered taking the rickshaw (from 77th to 28th and Lex) to visit THE  OLD PRINT SHOP, but found it would have cost $60.00, a 40 minute pedal ride to go via Central Park to avoid the traffic.  Our options were to do that, or to take a yellow cab, that would (and did) cost $18.50 with tip, or to walk back to the subway at Lexington Avenue, costing $1.50.   Looking for a few minutes of respite, we found that visitors are not allowed to sit on the steps of the Museum, nor are they allowed to smoke until they reach the sidewalk!
It was then that a rickshaw ride seemed so inviting.....
At THE OLD PRINT SHOP we met the artist Michael Di Cerbo, whose distinctive etchings of  New York city buildings at night, reminded me of the picture I had taken last February of the Helmsley Building, as seen below.  (Click on to contemporary printmakers for more information about his work).
Posted by Margaret Gosden at 7:37 AM