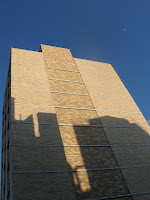 At sunset,
Will they sleep, all 740
Dream their way to glory,
Neighbors hold their
Breath
It does not seem inappropriate to republish my haiku about NYU's megadorm, now that their public relations agenda is preparing the ground for neighbourly acceptance of its Fall student population.
Despite huge resident protests and suggestions for a more friendly placement of student residents, the city planning department and NYU continue to flout realistic resident sentiment to achieve an ambitous 'blueprint for growth over the next 22 years'.
Whether by design or by accident, NYU chose June 22 to throw its summer cookout in the rear courtyard of its new building, with an official Tour of the facilities, at the same time as the scheduled meeting of the GVSHP group announcing an OPEN FORUM: the NYU 2031 PLAN, to discuss the consequences of such a far reaching plan to the neighborhood.
I chose to go to the BBQ and Tour, and noticed the lack of the presence of unresponsive neighbors.   Clearly, they chose the other meeting to see what NYU is up to next.   Still, it seemed important to see what students might expect to find when they begin to show up in the Fall.
Sadly, the dorms do not live up to expectations.  The tour groups (ten, at the most, could fit into an elevator) were shown a couple of dorms on the 25th floor, two next door to each other, each to sleep two students.  Each dorm had a tiny restroom with a shower big enough to hold one person.  No expense spared here.  Each room for two had a closet large enough for one person and, if the number of laundry rooms, said to be situated on every third floor, is anything to go by, students will not need to bring much to wear.   The lesson being that, "these facilities offer basic living for the student experience!" explained our tour guide.   All 740 of them.  There just isn't very much room to add much more than themselves and their books - no place for knick-knacks, or clobber that students might necessarily accumulate.
Perhaps the best feature in each room is the picture window, giving a clear panoramic view of the city - but they may not be opened more than 6" - small blessings to concerned parents. Reportedly, the building will bring in over 8.8 million per academic year, the cost to the student being $12,000.   That is a lot of money for a prison-like abode that will surely drive every one out to the nearest parks that already conveniently serve as the university campuses.  Are we talking about a making a profit for someone here, or offering a meaningful "student experience",  for our children and grandchildren, I wonder.
The passages between rooms, and the elevators themselves, are claustrophobic.  Personally, I think I would settle for a room closer to he ground, suspecting that waiting for the elevator will be liking Waiting for Godot!   And the students will have to go elsewhere for their dinners, to two nearby cafeterias.  As a neighbor, thank heavens for small mercies. We saw a small lounge for chatty activities which included a row of cubicles for the use of laptops.
Replacing St. Ann's - the dorm now dubbed 'God's Dorm' - is situated in the middle of 12th street between 3rd and 4th avenue, its final height including 26 storeys, was allowed because of some questionable legality that could not be overturned by tenatious committee research work.
Some two years ago we, the immediate neighbors to St. Ann's, watched in horror as the church was systematically demolished by wreckers before we knew what was going on.  A committee was quickly put together, headed by Elizabeth Langwith, whose apartment window now faces a windowless wall, albeit one that was carefully chosen for its natural reflective qualities.
But there was more to the event than many of us losing our views.  An energetic committee soon interested Andrew Burman, Executive Director of GVSHP, prime mover and supporter, protecting residential interests in the Village from the cunning take over policies of NYU, and other contractors with greedy eyes.  The Village neighborhood is an area subject to much change at the present time, and if GVSHP was not around, there's no telling how many more megadorms would get the go-ahead before anyone could doing anything about it.  The Village, from the east side to the west side, is loathe to accommodate high rise buildings that destroy the historic nature of many residences and its hard won, cherished, green environs. 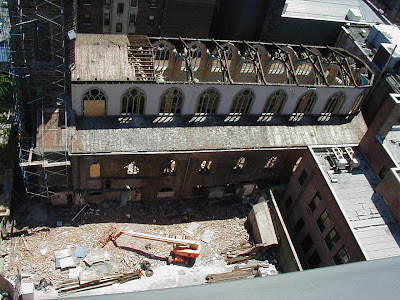 The demolition of St. Ann's.
Posted by Margaret Gosden at 7:23 PM